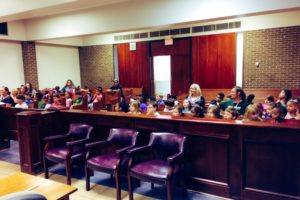 On May 3rd, the kindergarten classes from Walter Jackson Elementary School had their annual City of Decatur field trip. One of the stops on the field trip is City Hall for a visit to the Municipal Court. The students started the lesson on the court system by saying the Pledge Allegiance to the flag. Judge Cook explained to the students how the rules that they are learning now are the same rules that apply to adults. The rules that apply to adults are called laws. One example that was given was if someone takes something that belongs to you and will not give it back then that is called stealing. If an adult takes someone else’s property then it is considered theft. If an adult breaks a rule or law then that person might have to come to City Court to see the Judge. The favorite part of the tour every year is when the students get to be the “Judge” and say “Order in the Court” and hit the Judge’s gavel on the bench.