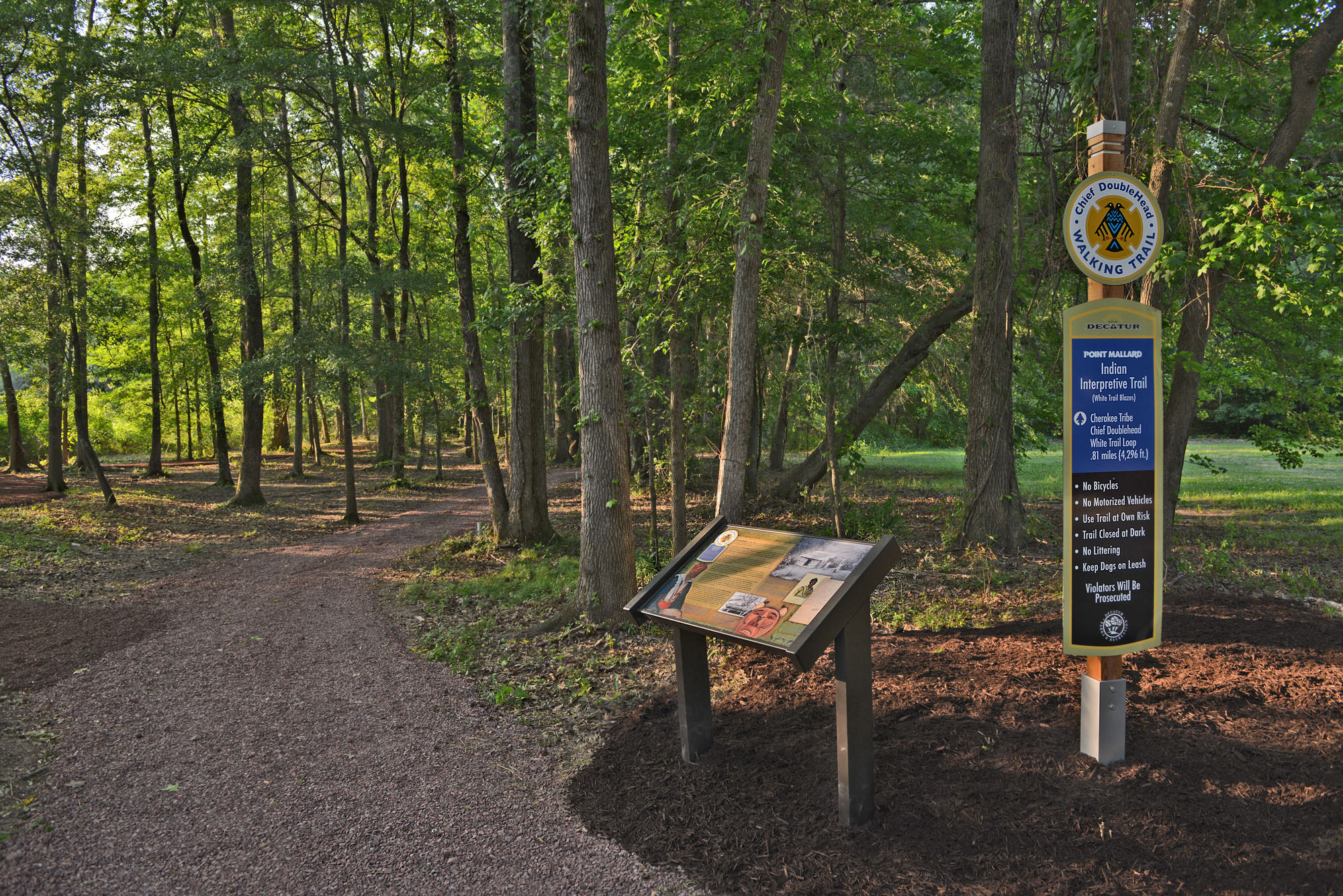 Perhaps our greatest discoveries are those that take us by surprise. The development of Point Mallard’s new Native American Indian Interpretive Walking Trails are a perfect example for this fateful phenomenon.

In 2008, the Decatur Parks and Recreation Department received a federal grant to remove Chinese privet and other invasive vines from the portion of Point Mallard Park that borders Flint Creek. In total, five-and-a-half miles were cleared in the arduous process.

Like uncovered treasure, native azaleas and spider lilies sprung from the revitalized terrain and a champion-sized Alabama red maple was discovered on the land. With a near-perfect showcase of indigenous flora, efforts have since been taken to preserve the area for generations to come by developing a system of recreational walking trails for Decatur citizens and visitors.

As he walked through the area during the clearing efforts, Decatur Parks and Recreation’s Facilities and Operations Manger, Paul Floyd immediately realized that great opportunity rested in the soil below.

“As I explored the area, I knew that the area would be perfect for a walking trail. I thought that our area could benefit from a destination that focused on the Native American influence in the Tennessee Valley. All the information I pulled when I got back to my desk led me to one conclusion—there was a mountain of Native American history in the Decatur,” said Floyd.

The trails that now flow through the wooded corner of Point Mallard hold the histories of countless generations. The tracts of land once served as a haven and a home to the Cherokee, Creek, and Chickasaw tribes of the Tennessee Valley long before the European civilization of the South. It is even believed that the land of the trails once belonged to the Mound Builder tribe close to 1,000 years ago.

Last summer, the Chief Justice of the Supreme Court of the Cherokee Nation, Troy Wayne Poteete, and Rickey Butch Walker, a local Cherokee and Creek historian who helped with the development of the trail literature, dedicated the two Cherokee trails and officially opened the trails for public exploration.

The development of the Native American Indian Interpretive Walking Trails has only just begun. Coming improvements for the area will include: informational kiosks detailing the local Native American heritage, plant identification markers for Alabama plants, and a foundation of trail rock to preserve the cleared pathways.

When asked about his vision for the future of the project, Floyd commented, “I would like to see the area become an educational destination with both historical and botanical components for visitors of all ages. These trails are far more than just a place to walk, they serve a place to learn and embrace the heritage of our community.”